The Quadcopters have four motors that use four fixed pitch propellers. Mechanically, this is very simple compared to a helicopter. Coupled with the compact electric motor powered directly by the battery, its simplicity makes small model quadcopters increasingly popular in RC hobbies. Four-rotor aircraft are popular because they are mechanically simpler, safer (since the rotor is smaller), and easier to control through software.

Large quadcopters are also divided into different levels depending on their carrying capacity. In general, if the clarity of the photo or video capture is required, the drones needed will be larger because the cameras they can carry will vary depending on the size. For example, DJI’s S800 Large quadcopter can be used to mount professional SLR cameras, mainly for filming.

There are also some that are much smaller, suitable for mounting sports cameras such as Gopro. 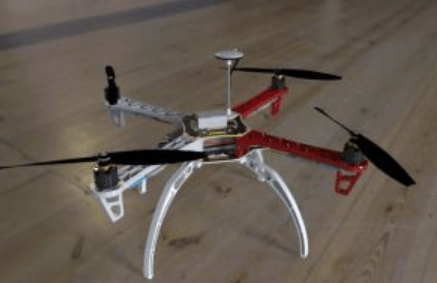 Naturally, the larger the drone, the heavier the weight. This means that the motor must do extra work to lift the drone off the ground and keep it in the air. Larger drones carry higher capacity lipo batteries that support the size of the drone, Choose lipo batteries for quadcopter is depend on their size.

When fully charged, these batteries keep the drone in the air for up to twenty to forty-five minutes.

For aeromodel enthusiasts, DIY a big quadcopter is not an easy task. You can buy a complete solution from a brand manufacturer and then assemble and debug it yourself, such as DJI’s S800 series. But for many fans, the price will be more expensive. You can also buy the kits and assemble them yourself. Kits that generally need to be purchased include: flight control, ESC, brushless motor, remote control, lipo battery, bracket, etc. The cost of purchasing component DIY according to your needs will be much lower.

The agility of a quadcopter depends, in addition to the electronic speed controller, on the inertia of the propeller. As you can imagine, in general, the bigger and heavier the item is, the more difficult it is to slow down or accelerate. As a result, this results in a slower agility and responsiveness of large quadcopters.

Another point to note is that the Large quadcopter is dangerous because it has a large block and the propeller rotates at a fast speed. Therefore, you must choose no one, wide space, and a good view to fly. Sometimes the rotor fixing screw is loose or hitting a foreign object, causing the rotor to break and the propeller flying out. It can be very dangerous if the propeller hits a person, especially a vulnerable part of the eye. So for novices, it is best to adjust the four-axis with goggles to protect the eyes.

Small Quadcopters generally cannot carry too heavy loads due to their small size. However, the principle used to study the aircraft, as a channel for the entry model, has been more than enough. The components of the flight control, ESC, motor, remote control, battery, bracket, etc. mentioned in the Large Quadcopter are all present in the Small Quadcopter, but may vary depending on the characteristics of the Small Quadcopter.