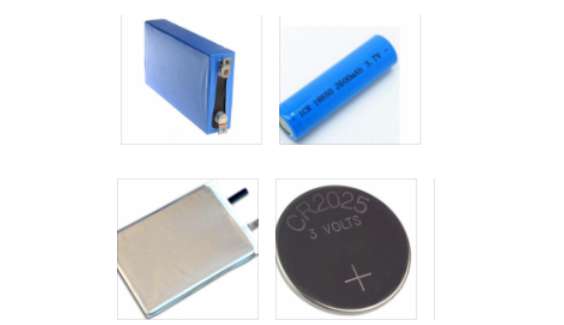 The cylindrical cell, button cell, prismatic cell and pouch cell are intuitively different only in shape, but at the same time they differ in terms of technology development and application, so what happens to small batteries due to different shapes, and what are the advantages and disadvantage?

Each shape has advantages and disadvantages, as shown below.

Cylindrical batteries have the advantage of being easy to manufacture and good mechanical stability. The tubular cylinder can withstand high internal pressure without deformation.

Many lithium and nickel based cylindrical batteries include positive thermal coefficient (PTC) switches. When exposed to excessive currents, normally conductive polymers heat up and become electrical resistance, preventing current flow and providing short-circuit protection. Once the short circuit is removed, the PTC cools and returns to a conducting state.

Most cylindrical batteries also have a pressure relief mechanism, and the simplest design uses a membrane seal that breaks under high pressure. Leakage and drying may occur after the membrane is broken. Re-sealable vents with spring valves are the preferred design. Some consumer lithium-ion batteries include a charge interruption device (CID) that physically and irreversibly disconnects the battery when activated to unsafe pressure. The cylindrical battery design has good cycle capability, has a long life and is economical, but it is heavy and has a low packing density.

The 18650 lithium battery was invented by Sony Corporation of Japan in 1992. It has also become the most common cylindrical battery design. For example, the No. 5 and No. 7 alkaline batteries are designed in this shape. In the following period, due to the increasing application scenarios of batteries, the square battery headed by Samsung SDI and the pouch battery design led by LG &Huawei also entered the market. Currently, the three types of technologies are also applied in new energy vehicle products. The 18650 is still one of the most popular battery packs. Typical applications for the 18650 lithium-ion battery include power tools, medical equipment, laptops and electric bikes.

This may be the optimal battery; it provides one of the lowest cost per Wh and has a good reliability record. As consumers turn to the flat design of smartphones and tablets, the demand for the 18650 is fading. To allow for variations within a given size, manufacturers use partial cell lengths, such as half and three-quarters, and nickel cadmium offers the widest variety of cell options. Some spilled into the nickel-metal hydride but no lithium ions.

There are other cylindrical lithium-ion battery specifications, sizes 20700, 21700 and 22700. The 18650 has a capacity of about 3000 mAh in a volume of about 16 cm3 (16 ml), and the 21700 battery has a capacity of up to 6000 mAh for about 24 cm3 (24 ml), substantially doubled and volume increased by 50%. Tesla Motors’ new 21700 cylindrical ternary lithium battery is one of the highest energy density power battery solutions available today. The manufacturing process of the cylindrical battery core is winding, and the general energy density is about 260 Wh/kg. However, in terms of system security, cylindrical batteries have poor system safety and high requirements for BMS and cooling systems. And the monomer capacity is low. However, the advantages of cylindrical batteries are that the automated production process is mature, the cost is relatively low, the battery pack is consistent, and the energy density is high.

The larger 26650 battery with a diameter of 26mm is not as popular as the 18650. The 26650 is typically used in load balancing systems. Thicker cells are said to be more difficult to build than thinner cells. It is preferred to make the cell longer. There is also 26700 made by E-One Moli Energy.

Although cylindrical batteries do not make room for space by placing air pockets side by side, the 18650 has a higher energy density than a Prismal/pouch lithium ion battery. The 3Ah 18650 has an output of 248Ah / kg, while the modern pouch battery is 140Ah / kg. The higher energy density of a cylindrical battery compensates for its less than ideal stacking capacity, and the empty space is always available for cooling to improve thermal management.

Modern Prismatic-shaped batteries were introduced in the early 1990s to meet the demand for thinner sizes. Prismatic-shaped cells are wrapped in an elegant package similar to a box of chewing gum or small chocolate bars, making the best use of space by using a layered approach. Other designs were wound and flattened into a pseudo Prismatic jelly roll. These batteries are mainly used in mobile phones, tablets and low-end laptops ranging from 800mAh to 4000mAh. There are no general specifications and each manufacturer designs its own specifications.

Prismatic shaped cells also have large specifications. Packed in a soldered aluminum housing, these batteries are available in 20-50Ah capacity and are used primarily in electric and electric vehicles for hybrid and electric vehicles. Prismatic-shaped batteries increase space utilization and allow for flexible design, but with higher manufacturing costs, lower thermal management, and shorter cycle life than cylindrical designs.

Prismatic-shaped batteries require a rugged housing for compression. Some expansion due to gas accumulation is normal and must be increased; 5 cells can grow 8 mm after 500 cycles. If the twist is pressed against the battery case, stop using the battery. Battery expansion can damage the equipment and endanger safety.

Button batteries have achieved a compact design in portable devices in the 1980s. Higher voltages are achieved by stacking cells into tubes. Airport cordless phones, medical equipment and safety bars use these batteries.

Although the construction is small and inexpensive, stacked button batteries are no longer popular and give way to more traditional battery specifications. If charging is too fast, the disadvantage of the button battery is expansion. The button battery has no safety vents and can only be charged for 10 to 16 hours; however, newer designs require fast charging capability.

Most of the button batteries currently in use are non-rechargeable, small in size, and most are the main batteries used in single cells. Can be used for medical implants, watches, hearing aids, car keys, etc.

Note: Keep the button battery out of the reach of children. Swallowing a cell can cause serious health problems.

The pouch battery is the most efficient use of space, achieving 90-95% package efficiency, which is the highest in the battery pack. Eliminating the metal casing reduces weight, but the battery needs to be supported and allowed to expand in the battery compartment. pouchs are used in consumer, military and automotive applications. There are no standardized pouch cells; each manufacturer designs it by itself.

Pouchs are usually lithium polymers. Small batteries are widely used in portable applications that require high load currents, such as drones and hobby equipment, and larger batteries in the 40Ah range are used in energy storage systems (ESS).

Although easy to stack, pouch is still possible to swell. While smaller packs can grow 8-10% over 500 cycles, large batteries can scale to that size in 5,000 cycles. It’s best not to stack the pouch batteries together, but lay them flat, side by side or leave extra space between them. Avoid sharp edges that will stress the pack cell as they expand. In this case, stop using the battery and do not puncture the bloating chamber near a heat source or source of ignition. The escaping gas can ignite.

The pouch battery is manufactured by adding a temporary “airbag” on the side. During the first charge, gas escapes into the bladder while forming a solid electrolyte interface (SEI). Cut the air bag and reseal the package as part of the finishing process. Forming a reliable SEI is the key to good normalization practices. Subsequent charges should produce the least amount of gas, but gas generation, also known as deflation, cannot be completely avoided. It is caused by decomposition of the electrolyte and is part of the use and aging. Stresses such as overcharging and overheating promote gas inflation. Normally used balloons usually imply a defective batch.

The technology has matured, and prismatic and pouch-shaped batteries have the potential for greater capacity than cylindrical gauges. Large flat components provide good results for electric power systems and energy storage systems (ESS). The cost per kWh of a prismatic/botton battery is still higher than the 18650 battery, but this is changing.