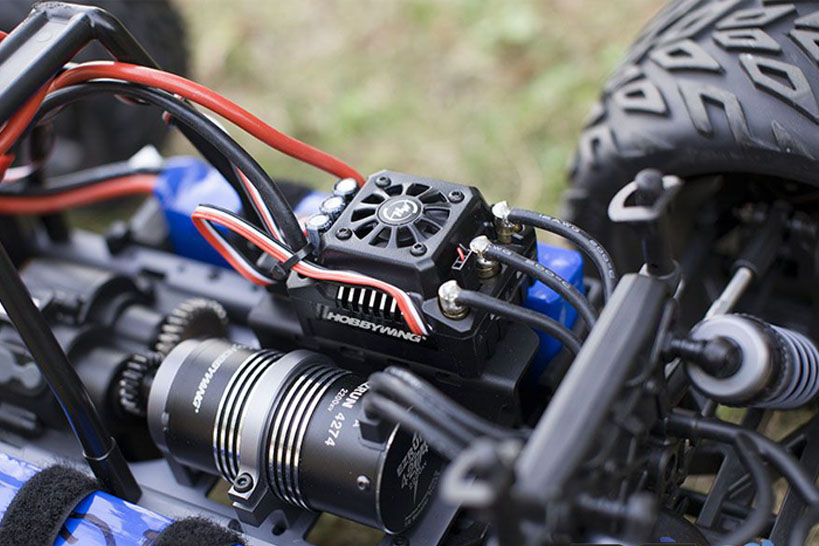 The frame adopts the currently popular Hobao MT 1/8 big bike, the advantage is that the whole vehicle is very cost-effective. The disadvantage is that some plastic parts are soft, the length of the fixed tie rod is too short, and the ball cap is easily damaged after the violent test. In addition, the lock nut of the original car is easy to loosen. But KKPIT provided us with a set of nuts with reverse teeth, which can effectively prevent the nuts from loosening after replacement, not bad!

However, I have consulted the manufacturer and determined that unfortunately, the original steering gear is not a waterproof model, only waterproof and splash-proof, but we still decided to add waterproof glue to the outlet, and then dive directly.

The 4S battery test uses an Ovonic 2S 6200mah 50C violent battery. After the test, the battery is only lukewarm, which impresses me.

As for the 6S, since the requirement for the C number under the 6S is not as high as that of the 4S, the C number is selected and we find the model of Ovonic 3S 5000MAH 50C. The explosive power of the battery is super high. When testing the 6S platform, I deliberately did not use a too-high approach speed but used the state of full-throttle immediately after the platform, and the take-off height could almost reach the moon. After the test, the temperature of the battery is similar to that of the Ovonic 2s 6200mah, and it is only warm.

The receiver uses SANWA’s most affordable waterproof model RX-371W, which is very worry-free and works well in trams. Just wire it directly, you don’t need to do any waterproofing yourself.

However, this is measured at the maintenance office after the platform jumping, and there is about 1 minute in the middle for the fan to cool the ESC.

The biggest advantage of the fully waterproof design of the whole set of ESCs is rain or shine, is more fun. So we were so happy during the test that we forgot to unplug the fan before going into the water. Originally thought the fan might be damaged. However, after the water flow of the ESC went away, the fan returned to normal operation!

The equipment compartment of Hobao MT4 originally had a cover, but we did not install the cover in the whole test because we were worried that the water would not flow away in time.

Due to the time problem, we conducted a straight test on the second day. The original wheel hub tires were soft and the high-speed stability was poor. The same situation was also found in another set. In addition, the length of the straight road was not enough. The car 6S can be seen in the power test video. Even if the accelerator is increased at high speed, the heat rises. The power of running the 6S is definitely more than excellent. At that time, if you put on special flat tires, you can go faster on a long enough straight road.

The straight road test ended with the car colliding with the planter at high speed and the rear arm code was broken. The final measured motor temperature was still only 52.9 degrees, and the ESC temperature was 46.3 degrees, which are all relatively low temperatures. It can be seen that the power of this MAX8 ESC is absolutely powerful!

The power linearity of the new MAX8 is better than the previous non-inductive power linearity. The power delay at low speed is extremely low, the explosive force is strong, and the heat generation is extremely low. With the fully waterproof design, it is by no means worse than the imported power. Plus excellent after-sales, I believe it will become the best choice for high-end non-inductive players.

For this test, we believe that the test is still not in-depth enough, and we will compare other power tests later, change different models for more violent tests, and evaluate the long-term use of ESCs and motors.