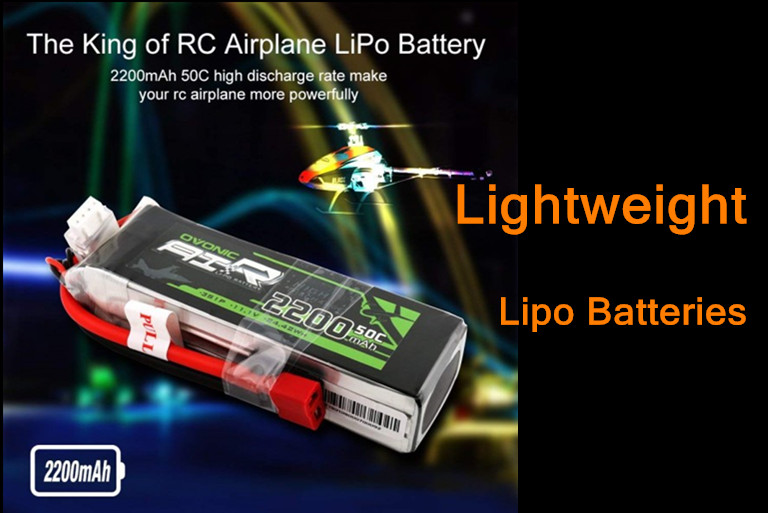 Traditionally, nickel cadmium (NiCd) or nickel hybrid (NiMh) batteries were used to power drones, airplanes, and other unmanned aerial vehicles, or UAVs. Today, lithium based batteries are taking over because they are much more energy dense.

Lightweight lithium batteries that go-to choice for anyone who wants high power and long run times. Though they are slightly more expensive, they deliver above and beyond traditional nickel-based batteries. Not convinced? Read on, the numbers don’t lie.

Lightweight LiPo batteries are much more powerful and energy dense than traditional nickel based batteries due to its improved capacity. You’ll get significantly more airtime per charge by switching over. Nickel-based batteries usually have somewhere between 2,000mAh and 3,000 mAh of capacity in them. Though it’s hard to make a direct comparison because airplanes and drones have different size requirements for their batteries, the most popular lightweight LiPo battery clocks in at 1000mAh -5,000mAh, with some models even ranging as high as 30,000mAh.

With lightweight LiPo batteries, there’s at least double the amount of flight time compared to nickel based varieties such as NiMH and NiCd. (If you want to know more about Lipo vs Nimh, see here https://blog.ampow.com/lipo-vs-nimh/) And because they are also much lighter and thinner, the weight of the cargo decreases on the motor, meaning that it has to work less to go further. This also improves your flight time.

The Lighter Weight Will Improve Your Speed

Lightweight LiPo batteries have a lighweight, meaning they can pack more of a punch and deliver greater bursts of speed as you accelerate, compared to nickel-based alternatives. Older, nickel-based batteries simply don’t have the punch many drone or airplane flyers are looking for.

If you have a 3,500V brushless motor, you’ll hit 3,500 rotation per minute in the motor per volt applied. Nickel based batteries, such as the NiMH or NiCd batteries typically discharge at 1.2 volts for most of their flight time, giving the user 4,200 RPM. But 2S lightweight LiPo batteries will run at around 25,900RPM. A 3S lightweight LiPo battery will run almost 10 times faster than NiMH, at a startling 38,850RPM.

It Will Also Improve Your Ability To Freestyle

We’ve discussed the capacity and voltage and how they affect flight times and speed, respectively, but let’s get into how they come together. Lightweight LiPo batteries have a better discharge rating, which is loosely defined as the maximum amount of load you can safely put on a battery.

Discharge rates are dependent on the capacity of the battery. Because lightweight LiPo batteries have higher capacities, their discharge rates are higher. This improves the flying experience in it’s burst discharge, when you’re accelerating or making complex maneuvers, and in it’s continuous discharge, such as when you’re zipping down a straightway. There’s some debate about which type of discharge is most important, but overall, lightweight LiPo batteries give you an upgrade in all the ways that count.

Where to order lightweight lipo batteries? Here is the right way ampow.com